I had an amazing experience today.  It has changed my entire life.  I was discussing religion with a Christian friend and while we were discussing whether god exists or not, I had a vision. In this vision, Jesus appeared before me, glowing.  And he spoke to me.  To me!   I had no idea!  And while what he told me was personal and I am not ready to share it with others just yet I can tell you that He was beautiful.  Gazing upon Him I was filled with an overwhelming feeling of love.  I can never go back to what I realize now was an empty existence.  I thought I had love, but I had no idea.  So today, I am announcing that after all this time, I have found Jesus.  He is no longer lost. Hallelujah!

Illegal Drug Use is Immoral

END_OF_DOCUMENT_TOKEN_TO_BE_REPLACED

I am in love with Philip Glenister

And yes, I should be doing my taxes right now, but seriously, this guy is hot in a weird sort of way.  Philip Glenister currently plays Gene “Genie” Hunt on the BBC Series Ashes to Ashes, which is the sequel to Life on Mars.  Both titles come from David Bowie tunes (same album actually). His character is a bit boorish – but obviously has a really strong moral compass and the hots for our female lead.  But because he is her boss and he does the right thing, well – what we have is some spectacular sexual tension.  I suppose what makes us gals like his portrayal of Gene “Genie” so much is that our female lead is both attracted to and repulsed by him and so we are.  It’s either that or sequences where they pan the camera up from the crotch set to really stirring music that is doing it. Regardless, Philip does an amazing acting job as he manages to balance this complex character just right.  Keep in mind he is no John Barrowman, but I still find Philip Glenister strangely alluring. Fire up the quattro. 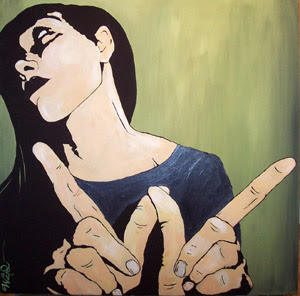 I was introduced to a new word by an online Humanist friend the other day.  In his facebook profile he says he is an Apatheist.  He then goes on to define Apatheist to mean  “I don’t care what you believe in as long as you act compassionately and don’t try to shove dogma down anyone’s throat.” Basically- the question of is there or isn’t there is not interesting to an apatheist. Boy – does this ever describe me!  And probably my husband too.  I don’t know as he doesn’t care enough to discuss religious beliefs – which probably means he is an apatheist too.  So, now that I have this new word I can describe myself as an apathetic agnostic (don’t know, don’t care), apatheist (I think the very question is stupid), atheist (deep down I don’t believe), ignostic (I have no idea what people mean when they say the word “god”), and of course, Humanist which is the only term that is relevant to everyone else.  Because Humanism is the only term that tells others what my values are – and that is what is really important.

Why is Compassion so danged hard

END_OF_DOCUMENT_TOKEN_TO_BE_REPLACED

The Morality of Stem Cells

The other day – some moms I know were lamenting Obama’s stance on stem cell research.  I jumped up and down in joy.  This led to a discussion I wish I hadn’t had.  Mostly because I like these women and I don’t want to be rude.  However, I have just about had it with Fox viewers who aren’t just ill informed, they are misinformed and spoon fed paranoia and somehow think they are getting a balanced view of the issues.  Makes me sick and I am tired of it.  Anyway – I wasn’t at my best, and they put forth a straw man argument against using waste blastocysts for stem cell research that I had never heard before and it caught me off guard.  They also went off on a tangent against in vitro fertilization and again – it was off topic and again, it took me by surprise.  The stem cell debate is all about answering the question, “What is the moral thing to do with waste blastocysts?  Should we keep them frozen, throw them away or use them for research?  Keep in mind we are talking about a group of undifferentiated cells (see photo on above right).

END_OF_DOCUMENT_TOKEN_TO_BE_REPLACED

Did Cheney have Pat Tillman killed?

Ok – that header seems a wee bit conspiracy theory-ish.  But hang tight.  We have recently learned from Seymour Hersch that Cheney had an executive assassination squad that bypassed all oversight and reported directly to him.   This squad operated in several countries apparently.  They would go in, kill someone and leave. What I want to know is whether Pat Tillman was one of the ones Cheney had killed.  There is a very good chance that Pat was intentionally murdered. (for more details click here)  So, it stands to reason that if Cheney was having people killed and if Pat Tillman was indeed murdered, then Cheney could very well be the one who ordered him killed. Since the assassination squad was an elite unit – it would explain why no one has talked about what really happened yet.  But they will.  Too many people know what really happened and someone will eventually talk.

Keith Olbermann really wants Bush et al prosecuted for war crimes.  I do to.  But… I think the rush to have them all charged now is misplaced.  First off, there are several cases already in the courts regarding torture and other activities.  Ethically – Obama should stay out of those proceedings and allow them to take their course, which is what he is doing.  At the moment, what really matters most is that we get the budget passed and health care, alternative energy, education reforms passed as well. War crimes prosecutions will get in the way of getting those bills passed.  Once we have them, then we are free to go after these criminals. If we set up a truth commission, it will be just for show and a huge distraction.  I cannot see us passing the other reforms if a truth commission is going on.  So lets all calm down.  Get needed reforms passed and then lets see whether the Obama justice department uses the time it is being given to put together rock solid cases against the outgoing administration or not.   If not, then feel free to get your panties in a bunch.