I’ve been thinking a lot about this lately. Not just because of the recent death of Jamey Rodemeyer, but because it really seems to be a problem that defies a solution. Not just in schools, but for adults as well. My mom always taught me that bullying behavior is about the bully and their insecurities and usually has nothing to do with the victim of the bullying. If you ignore them and don’t respond to them emotionally, they will go find someone else to bully who will. When I first had to deal with bullying in school, this advice worked wonderfully.

END_OF_DOCUMENT_TOKEN_TO_BE_REPLACED 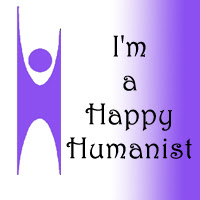 I was on The God Discussion last week. When I came on I was told that they have more unsubscribes when I come on then when they have an atheist come on.  It seems the more religious members of their audience are generally ok listening to an Atheist, but god forbid they have a Humanist on to talk about Humanism. Deborah, the host, said that the comments made by the unsubscribers were really rather angry. Funny, I thought I was rather nice.

And, really, it’s no joke. Yes, I’m an atheist, but I’m not anti-theist. I really don’t care what other people believe. I should be the sort of non-believer that religious people would welcome. But apparently, the philosophy of Humanism poses more of a threat to religious belief then Atheism does.

END_OF_DOCUMENT_TOKEN_TO_BE_REPLACED

If you thought we were past elevatorgate, you were wrong. William Hamby, the Atlanta Atheism Examiner, posted an article where he tried to answer the question of why there aren’t that many women in the Atheism movement. He thought sufficient time had passed since elevatorgate that we could actually talk about solving the problem elevatorgate was supposed to bring to our attention. He did this by datamining. And yes, he is a man after my own heart because that’s what I used to do when I was still a professional in the workaday world.

Anyway, what he found is apparently pissing off the rabid feminists in the atheist movement because it turns out that what atheist women really care about aren’t the things that rabid feminist atheist women care about. Which means that their prescriptions for solving the problem probably won’t work. What Hamby says he found atheist women are concerned about is politics (not necessarily gender politics, but politics in general), their families and kids and sex (and again, not gender politics sex, but actual sexy sex).

END_OF_DOCUMENT_TOKEN_TO_BE_REPLACED

I’ve been thinking about the Sept 11th memorials today and I’ve come to realize, I don’t like them. Not because I don’t understand the need for them. But because I simply don’t want to remember how I felt that day. It was horrible.  And that got me thinking. What would be a better response?  As a Humanist, my inclination is to look to the future. What can we do better going forward?

The answer, I think, is to Humanize religion. I am not naive enough to think that the problem of radicalized religion is ever going to go away. Religious belief is here with us to stay and as long as it is, there will be people who take it way too literally and who will use it to justify their angry and hate filled ideas. All religions suffer from this problem. No group is immune to it. And as my dad always says, no group corners the market in stupidity. It’s a problem that we would have to deal with religion or without.