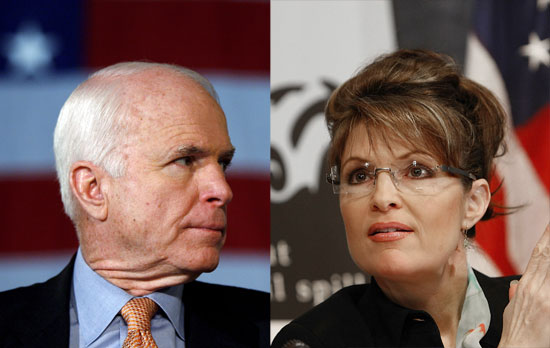 Ok, I have been trying not to write about Gov Palin for a while.  Thought it better to focus on McCain, but really, something has come up that just has me seriously wigged.  Sarah Palin doesn’t read the newspaper!

It is one thing to not be able to name any important cases from the Supreme Court other then Roe v Wade.  I can name several and tell you the one I like the least (Herrera v Texas), but then again, I am a Supreme Court wonk.  I am politically involved in issues that the Supreme Court has ruled on so am familiar with a handful of cases of importance to me.  Not everyone is, so not being able to name another case, especially when surprised by the question isn’t a big deal.  Though, most people should be able to name Dredd Scott, Brown v Board of Education.  The problem is she was asked if there were any she disagreed with beside Roe v Wade, and that is a much harder question to answer.  So, I don’t take any points off her for not being able to answer this question.

The one that I am flabbergasted by is that she gave a non-answer to the question of what newspapers she reads.  She didn’t name a single paper.  Not her hometown paper, nothing.  She couldn’t even pull one out of her hat, like the New York Times, USA Today, her local paper the Frontiersman or even the Anchorage Daily News. NOTHING!

I realize she specializes in glittering non-answers to cover her lack of knowledge and to limit her lying (which she appears to do pathologically), but this is just insane.  How can you not know the name of your local paper.  Even if you don’t have a subscription to it in your name, you can still claim to read it.  Even if you are asked what you think of a specific columnist, you can claim not to read that column.  Very few people who read papers read everything.

Yet, she couldn’t name a single paper she reads or likes.  Not one.  I just have a really really hard time grasping that.  She doesn’t even know what the names of any papers are in order to lie about what she reads.  That is just weird.  Think about it.  I can tell you the names of the local papers everywhere I have lived.  I can tell you what the small weeklies are named.  I can tell you what newspaper I read while on vacation in Europe.  But Sarah Palin can’t even provide the name of a single newspaper anywhere in the country.  The only explanation for this is that she just doesn’t read any papers.  Ever.  In her lifetime, she just doesn’t read the paper.  And this is especially weird since she obviously gives interviews with newspapers and should at least be able to give you their names.  Weird.

Ok, so.  Not sure how the debate will turn out, she apparently is great at not answering questions and being really charming in the process.  But, I can tell you that part of the Couric interview yesterday with Palin and McCain was just plain creepy.  My impression was that Sarah had been caught doing something she shouldn’t have and her dad was called in to the principles office and had to defend her.  It was really really creepy given that this is an adult woman who is running for vice president of the United States of America.  She should not need big daddy’s protection from the press.   And I am sorry, her answer didn’t matter because she was only talking to a voter is just nonsense.  Anyway, here is the clip so you can judge for yourself.

Now, finally, it appears that McCain said “horsesh*t” during the debate last week.  When Obama called him out on not wanting to talk to Spain (an obvious ally), McCain muttered under his breath what sounds like “horsesh*t, that’s horsesh*t.”  Now, the transcript has his words as “of course.”  I don’t know which is worse?  Here is the clip.

It would make much more sense if he was cursing.  And would be more in line with who he is as a person and not something I would hold against him.  At this point, he must know he had screwed up that interview when he was asked about Spain, so he shouldn’t be surprised that is being used against, him, but would be understandably pissed that it was.   If he said “of course,” well, then he is agreeing with Obama’s point and that makes even less sense given McCain’s body language at the time.

Scuttlebut has it that Palin’s debate prep isn’t going to well.  I am hoping that Biden has been watching video of Sarah’s previous debate performances so he knows what to expect and has a strategy to deal with her. But, it will be interesting to see.  My guess is that more people will watch this debate then the presidential ones.