Reflections of my father

My dad was an extraordinary man and a lot of the way I think of things is a direct result of his influence on me. 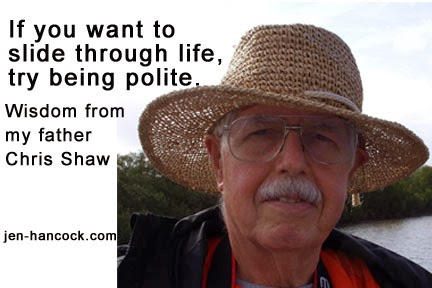 My dad would not have called himself a Humanist. But he was a good and gentle man in the finest sense of the term. He was also brilliant. And that’s not just me saying that, that was the most common comment we received in condolences and memories we received from his coworkers and friends after his death.

He had a very quick wit and loved to play with words and was definitely an intellectual, which the urban dictionary defines as someone who has found something more interesting than sex and alcohol, but which actually means someone who likes to engage in deep thinking.

My dad was a coach (he coached AYSO soccer for decades). He was a photographer (who had just shown his urban ground series at a gallery the weekend before he died). He had odd art objects all over his house (amid the clutter of his projects). He was a tinkerer, who was always working on some DYI project either artistic or functional (like the custom but rather stunningly artistic Earthbox knock-offs he created after visiting my house in FL and seeing our Earthboxes and learning how they worked). He always gave good advice.

So what does this have to do with Humanism and with who I am and why I write this blog?  My ethics, my sense of right and wrong and how I think, is a result of my upbringing. I was brought up to think critically. I was never allowed to hold an opinion without that opinion being challenged. I was encouraged to think compassionately and to not be selfish in my moral reasoning. Other people mattered.

While I credit my mother with my volunteer and activism ethic. I credit my dad with my interpersonal compassion. My mom told me that it takes two to fight and she would encourage me to see my own responsibility in any conflict. But it was my father who would calm me down and remind me that whatever interpersonal conflict I was dealing with, wasn’t really about me. The other person had their own issues and problems and I should respect that.

He would accomplish this feat of calming down an agitated teenager by using humor and redirection and then, when I was calm, he would explain to me why whatever the other person was doing, wasn’t really about me, even if I was the target of the behavior. I have the ability to self calm and consider others compassionately because my father taught me how to use humor to calm myself.

Everything I teach about how to apply Humanism to your daily life is predicated on being emotionally calm and compassionate. A calm cool demeanor is difficult to achieve but powerful when mastered. My father was a master of cool. I can count on one hand the number of times I saw him get visibly upset.  That isn’t to say things didn’t matter to him. They did. He was a passionate person. He just was cool enough to use reason and compassion and a good dose of humor to guide his response. He was alternative and ahead of his time and engaged with the world and apart from it at the same time. He was the epitome of what it means to be cool (see: https://philosophynow.org/issues/80/What_Does_It_Mean_To_Be_Cool)

My dad died Sept 9th.  I’m still grieving him. I miss him terribly and I wish he was still around to give good and pithy advice to me. He isn’t. But I know that at least some of his wisdom is being passed on to my readers and to my son through me and my work. And that gives me comfort.