It isn’t that hard to think through potential consequences. The more you think, the more successful you will be.

I was contacted the other day by a guy who wants to form a Humanist political party. He apparently was unaware that a Humanist Party already exists, because he apparently didn’t bother to google the words “Humanist” and “Party” together. In other words, he had a great idea and wanted to get it off the ground and instead of doing any research, decided to promote the idea and see if anyone would help him.

Here’s the problem with that approach. It doesn’t work. Why, because it isn’t thought through.

If you are going to start any project, whether for profit or non-profit, find out who else if anyone is doing what you think needs to be done. Maybe what you think needs to be done is already being done and you just didn’t know it.  Maybe people are doing something similar that you can build upon and support. Maybe your idea really is unique. But you won’t know that if you don’t do your research. Assuming you are the first person to ever have your idea is egotistical and usually false.

The reason it’s important to find out what other people are doing is so that you can develop a strategy to either collaborate or compete with what is currently happening, or so that you can build upon what has gone before. What mistakes have your predecessors made in their efforts and how can you avoid making those same mistakes. If you don’t know this, you will probably make the same mistakes and be just as unsuccessful as they were.

If you want to be successful, learn from the mistakes of others.

Next, when I asked him what sort of impact he wanted to have – he wants to compete with the big parties in America, meaning the Republicans and Democrats. Which is nice, but when I asked him whether he planned to start at the national or local level he had no idea what I was talking about and he couldn’t answer the question. People think about starting political parties all the time, but if you don’t consider how this party will recruit, fund and support candidates so that they can actually win elections, then you aren’t really taking the project seriously.  You are just hoping for the best without doing anything constructive.

Electing candidates is hard business. Even at the local level. Finding candidates, training them, raising money to help them, providing ground support to get out the vote for them takes A LOT of time, effort and money, even if you don’t spend any money on advertising. If your plan doesn’t have a plan on how to accomplish the most basic tasks of any political party – then you won’t be successful.

In order to be realistic, you have to be specific about your goals. What exactly to do you want to accomplish and more importantly why.  Only then will you be able to judge whether your plan will help you accomplish your goals or not.

Why do you want to do that?

One of the things that frustrated me about my conversation with this man was that he had limited our conversation to his chosen solution but had not yet voiced the problem he was trying to solve with that solution. His solution was to form a political party. But why did he want to do that?  Well presumably because he wants more humanistic leadership developing public policy. This is something I would like to see too.

The thing about asking why and getting down to the real problem you are trying to solve is two-fold. 1) It allows you to consider other ways of accomplishing your real objective. These other ways may be more effective. How might you have the most impact on the real problem you want to solve with the least expenditure of resources and effort?  Forming a new political party is one way to do that, but it’s not the only way.

If you want to be successful, you need to have a plan. That plan should be well researched and that starts with properly articulating the real problem you want to solve, researching your options and THEN developing a plan to solve it based on the real resources at your disposal.

Having a crazy idea may be a good start, but it’s not a plan. 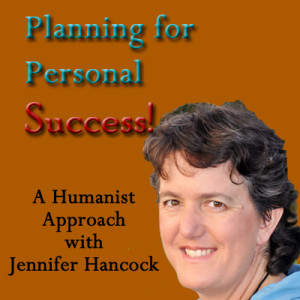 Learn how to more effectively plan for personal success – with a Humanist approach taught by Jennifer Hancock This 1 hour 45 minute video course discusses how Humanists approach the important business of living a life that is fully realized and understanding what success really means. See more at: https://humanistlearning.com/planforpersonalsuccess/