Why Clinton Creeps Me Out

This photo says it all.  This is the moment in last night’s CNN/Univision debate in Texas where Obama called Clinton’s attempts to label him as a plagiarizer “silly.”  Clinton responds with that weird pasted on smile she has when she has been caught being unethical.  She had the same sick smile pasted on last year when Edwards called her out for authorizing Bush to label the Iranian guard as a terrorist organization.

And then, as if her creepy smile wasn’t enough, she closes by plagiarizing her husband and loosely borrowing from Edwards.  Apparently, in addition to being a plastic candidate she is also a hypocrite.  We should have seen that coming given how inauthentic her campaign has been.  But ultimately, Obama is right, this discussion of plagiarism is silly.

The reason we, the people, are flocking to Obama is because even if we don’t agree with everything he says he wants to do, we at least feel he is being real.  He and his wife don’t always phrase things 100% correctly, but then real people make the occasional mistake.  I would much rather prefer his candied approach then Hillary, who came out with the “Change you can Xerox” line to attack Obama.  Come on Hillary.  a) It was obvious you practiced that, and b) it was really really dorky.  If you are going to make one of your attacks on Obama stick, you need to choose something that at least has a grain of truth in it.  You can’t just keep making things up, it makes you look bad, which is why you were booed last night.

The problem with Hillary is that she isn’t Bill.  Bill, at least, when he was lying, would smile and squint (his give away if you ever play poker with him).  Hillary just smiles like she is a deer caught in the headlights.  It is creepy.  Plus – the only scandal Bill got into was the sex scandal. Hillary on the other hand had a whole plethora of scandals involving various money deals.  I just don’t trust her and hope her candidacy ends in early March.

Now, for Michele Obama.  My husband thinks she is one of the prettiest women ever to be a potential 1st lady.  He really likes her.  However, she stumbled a bit this week with a comment about her pride in America.  As per usual, the right wing attack squads jumped on the statement and as per usual, they still don’t get it.

Michelle Maulkin wrote a column basically blasting Michele.  Why hasn’t Ms. Obama had pride in America?  Doesn’t she like our military?  Our response to disasters?  She had a whole list of things.  And, then she tells us that all liberals suffer from the same “hate America first” mentality Ms. Obama obviously suffers from. 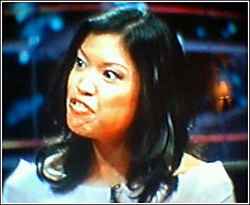 Here is what Maulkin clearly doesn’t get is that, we liberals like Americans just fine.  In fact, we are proud to be part of such an amazing group of people doing many of the fine things Ms. Maulkin points out.  What has us lowering our heads in shame is that grossly incompetent and highly unethical individuals have run our government for the past 8 years.  They have violated the very principles this country was founded on.  And while, we the people should be proud of our accomplishments as individuals, the government has fouled up everything from disaster response to waging an unnecessary war, committing war crimes, human rights violations and pissing off what few allies we have remaining.  You would have to be a callous idiot like Michelle Maulkin, who apparently thinks torturing people and running up out of control debts, putting us in a very precarious position and weakening our global stature to think that we should be proud of our country right now.

Michelle Obama was right.  That people are standing up to demand change and get behind a candidate, who can restore our moral stature in the world, is reason to be proud of America.  We aren’t the country Bush and his minions think we are.  We are better then that.  Maulkin needs to go climb under a rock where she will be more comfortable then dealing with Americans who actually care about personal and global ethics.