And more to the point, is he a racist?

I don’t think so.  It took me a while to track down the actual first article that led to this furor.  It is a little frustrating that the main contentious quote technically stands alone, so we have to take the writer’s word for it that the antecedent of the anaphor “this” actually is what she claims it to be.

Anyway – here is the original article – it is written by a woman who spent a year living with Watson and his wife while she worked at his laboratory.  She has great affection for Watson even though she is “still unnerved by his devil-may-care compulsion to say what he believes.”  It is pretty clear that she doesn’t think he is a racist even though she seemed to know immediately he would be branded as such.  My problem is that it is clear from the article that  the statement preceding the anaphor isn’t a quote from Watson. We don’t technically know what he was referring to and it is entirely possible that he was actually referring to something else not included in this article.  If he was, it would certainly explain why he didn’t remember saying anything of this nature, and why he agreed immediately that what was presented was offensive.

Here is the questionable paragraph in its entirety

He says that he is “inherently gloomy about the prospect of Africa” because “all our social policies are based on the fact that their intelligence is the same as ours – whereas all the testing says not really”, and I know that this “hot potato” is going to be difficult to address. His hope is that everyone is equal, but he counters that “people who have to deal with black employees find this not true”. He says that you should not discriminate on the basis of colour, because “there are many people of colour who are very talented, but don’t promote them when they haven’t succeeded at the lower level”. He writes that “there is no firm reason to anticipate that the intellectual capacities of peoples geographically separated in their evolution should prove to have evolved identically. Our wanting to reserve equal powers of reason as some universal heritage of humanity will not be enough to make it so”.

There are two statements that people have found offensive.

As we examine this paragraph, we find that contrary to claims he is a racist, he makes it perfectly clear he doesn’t think people should be discriminated against based on these findings.  His own track record in this area supports that claim.  He would like to have more women in the sciences and has gone to great length to recruit them, but there just aren’t as many women interested in his field of research as there are men (and this is absolutely true).  Likewise, he has gone to great lengths to recruit black individuals (regardless of gender) into his lab, but has apparently had problems finding qualified candidates.

Conversations about equality are emotionally charged because not everyone’s conception of equality is equal.  Watson is definitely for equality of opportunity and not equality of outcome.  This is where most of the controversy around his statements arises.

Are There Difference Among Groups of People?

As for his comments about the differences in intelligence geographically – it turns out that he was well within the realm of scientific knowledge to say that and it shouldn’t be considered controversial.   What little testing there has been does indeed show a strong difference in intelligence between populations of people.  Check out this map to see what I mean.  Much of Africa lags Europe and America by 20+ points.  That is a lot.

Now – there are probably several reasons why this might be true, including diet and nutrition, environment, access to and quality of education received, and cultural expectations in addition to the possibility of a genetic aspect.  And, while I recognize it is not PC to talk about a possible genetic cause for differences in intelligence, from a scientific standpoint, you can’t rule it out.

If we really want to fix the gap in quality of life conditions around the world, we would be remiss if we didn’t at least consider the possibility that the gap in conditions might actually relate to the gap in intelligence regardless of how much we might want to discredit the intelligence research.  This is especially true considering how directly these gaps seem to correlate.  In fact, you don’t even need to be a scientist.  Just compare this map of life conditions with the map above.  If you didn’t know they were measuring different things, you would think they were the almost same exact map!

While these findings are striking, we also must recognize how controversial these studies finding links between genetics and intelligence are.  See Wiki article for more information.

I obviously don’t have a problem with the first part of what he says as it is backed by the current science on the subject.  But the statement about if you have ever worked with a black employee, you will understand “this” is upsetting, especially if the context provided for “this” is correct.  According to the article, he was referring to everyone not being equal, when it comes to black intelligence.  The Times says that they recorded the conversation and stand by the reference.  Watson doesn’t remember making this point, but has not contested the Times article, though he has apologized and understands why people are offended by it.

Here is what is so confusing, and why I would really like to see or hear the transcript of this actual conversation.  Watson is someone who has actively recruited people into the sciences to help close the gender and race gaps, even though it has been difficult to do.   He clearly doesn’t think people should be discriminated against based on the average traits of their group and acts accordingly.  He also states clearly “there are many people of colour who are very talented.”

So why is he being branded a racist?  He isn’t advocating for any disciminatory public policy and he has personally acted in a way that is opposed to such policies.  The science he is referring to is controversial, but that shouldn’t warrant such accusations, especially since the data points that way, although we don’t know how much a role if any is played by genetics. 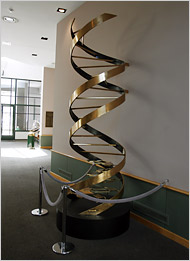 I think the Times owes the public a complete transcript of that section of the conversation James Watson had with the interviewer so we can judge for ourselves what exactly he was referring to in that comment.   As it stands, we have only the word of the writer and editors what the antecendent of that statement actually is.  And since it wasn’t a quote from Watson, we have to assume that what he said was more complicated then we have been led to believe, otherwise, they would have provided the entire quote.

Because we don’t know what he actually said, Watson should have been given the benefit of the doubt until we are given the facts.  Personally, I think that the 2nd comment about working with black employees has been taken out of context and that the true referrent to “this” is very different from what we have been led to believe.   For instance, if the antecedant was: while there are a lot of bigots out there who think that blacks are stupid, “people who have to deal with black employees find this not true.”  See how different the implications of that same quote are when the antecedent is changed?

Until and unless the Times releases the full transcript of the taped conversation with Watson, we will have to take the author’s word that what they have implied is what he really meant. Even though he was shocked to find he had implied anything of the sort.

In the meantime, I think this whole thing has been blown out of proportion by people who have their own political agendas and he should not have been forced to resign his post without proof that he actually said something as stupid as we have been led to believe.