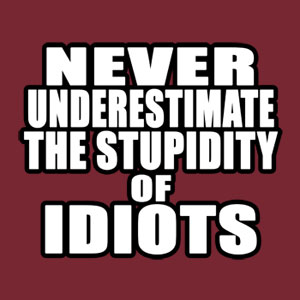 Why the Tea Party are idiots

Ok – so – we’re all pretty upset about the budget deficit. The Tea Party doesn’t hold a monopoly on that. But by holding this year’s budget hostage over a principle (fiscal discipline) that almost everyone agrees on, they are fighting the wrong battle.  Here’s why.

The argument we are having right now is over this year’s budget.  They can’t agree on it and we are almost half way through the year already. Instead of negotiating next year’s budget so that we can decrease our deficit and start paying off our debt, they are instead insisting that we fix this year’s budget by forcing us to continue last year’s budget which includes funding for things that have been cancelled. It doesn’t’ make any sense.

What they should be doing is accepting the compromise that we all know isn’t balanced. But by passing that budget, we can finally get this year’s budget off the table so that we can start digging into next year’s budget and start fixing our budget problems.

Basically – the Tea Party, in the name of balancing the budget, is preventing us from balancing the budget. Not only that, they are making us spend more money then we would have otherwise because we are still spending based on last year’s budget and not on this year’s reduced budget!  Idiots – the entire lot of them.

My guess is that they don’t really care about the budget at all. What they really want to do is shut down the government by refusing to raise the debt ceiling.  Which would really make things bad and cost us a huge amount of money – because when we fund the government again – which is inevitable, we not only have to pay for all the stuff that wasn’t paid for during the shut down, we will also have to pay interest and fees on being late on those payments. In other words, instead of paying for the government at the current levels, a shut down costs us more because of all the fees and fines that are added on. So again, in the name of fiscal sanity, the Tea Party is taking the path of insanity because they are apparently zealots who don’t understand how reality works or who never learned basic math!

To make matters worse, this entire debate is irrelevant. The Obama administration is working on a complete restructuring of government. They are planning to reduce duplication, redundancy and waste to help us get our costs under control. It’s a bold plan that renders mute all these little skirmishes over the discretionary budget!  It doesn’t matter what congress agrees on now, it’s going to be completely overhauled in the next year anyway!

So – to recap: The Tea Party, in the name of reducing our budget is forcing us to spend more money then we would be if we just passed this year’s budget. They are preventing us from discussing next year’s budget where some real savings can be found.  They are threatening to shut down the government if they don’t get what they want, except that what they want is impossible to do in this year’s budget. This shutdown will cost us quite a bit more then if we just kept the government running. And all of this grandstanding of theirs is pointless in the big scheme of things.  Yes, they are right – our deficit is out of control. But their approach is not only counterproductive. It’s also fiscally reckless, incredibly expensive and, totally pointless. In other words, they are idiots.

Sorry – but I just had to get that off my chest.