Florida finally has science standards that teach specifically evolution.  Yay!  It was a tough fight, but worth it.  Not surprising, the anti-science crowd came out to fight the inclusion of evolution.  Their comments at the many public hearings are proof enough why Florida needed to improve the science standards.  That some of these folks graduated from our schools is embarrassing.

Case in point – on Feb 11, the AP ran a story on the Orlando hearing.  In it, Lee Hyatt, 20, said that evolution couldn’t be proven because it has to be observed and no one was around 6,000 years ago to see creation occur.  Lee is obviously a case study on why Florida needed to improve its science standards.

First – if he was scientifically literate on what evolution is he would have known it has nothing to do with the creation of the universe.  So, talking about the start of the universe is irrelevant to whether evolution occurs or not.

Scientists are currently placing the age of our universe at around…13.7 billion years, give or take a couple hundred million years.  Lee apparently thinks it happened 6,000 years ago.  He is only off by 22,833%. What is his evidence for his claim?  Someone told him and he believed them and was told not to bother looking at the evidence for the 13.7 billion year old claim because it was all nonsense.  So, he remains intentionally ignorant.

As for whether or not people were around 6,000 years ago (4,000 bce), well, again, Lee is just not up on the current state of knowledge.  Scientists now think that humans in their current form have been on the earth for at around 200,000 years.  The archeological record indicates we started settling down (giving up our nomadic ways) around 10,000 years ago – though that could be wrong given it was the end of the ice age – and that we started forming states and governments about 6,000 years ago.  How do we know we humans had governments 6,000 years ago?  Because we wrote it down!  Yes, that’s right, the historical era is about 6,000 years old – historical era being what we have written records for.

It turns out we have marriage contracts, contracts for the sale of homes and other forms of property – all with dates attached. We have hymns, maxims, stories, codes of conduct, etc etc etc..  Lee would have known all this if he was literate, but unfortunately he isn’t.  The Florida schools failed him and obviously, we need to do better, which is why the standards have been improved, no thanks to his efforts to keep the rest of Floridians as ignorant as he is.

So, here is a quick prep for those of you who think we can’t know what happened 6,000 years ago because there weren’t any humans around, even though there were.

7,000 years BC – settling down of people after what appears to be flooding of many areas (result of melting ice), and people begin to farm, keep bees and write things down.  This is considered the Neolithic period.

5,000 years BC – pre-dynastic period starts in Egypt; the culture that built Stonehenge builds stonehenges in various forms all across Europe, lots of ceramics, lots of writing.   Hint – for those of you who aren’t good at math – this is 7,000 years ago, before the 6,000-year date Lee talked about.  This is basically when the Bronze Age started.

Interestingly, Egypt and China have written records going about 4,000  – 5,000 years, although Chinese records are more in the form of myth, but they keep finding archeological evidence to push back what is history and not myth even further.  Currently, Chinese written history is about 5,000 years, though the myths of the 3 sovereigns and 5 emperors goes back slightly farther, though the Damaidi site has writing going back about 20,000 years. 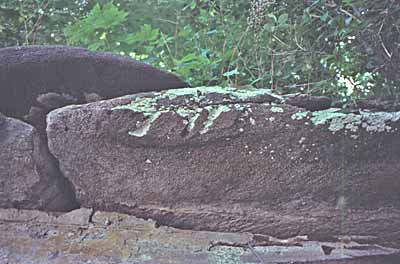 Just my opinion here, but if we have been modern for about 200,000 years, it is unlikely it took us 190,000 years to develop writing.  Most likely, we lost lots of writing during the tumultuous time following the end of the ice age and it took us a bit to recover and start building big things again – plus – many of those sites would be under water now.  It is also possible that what little writing did survive the end of the ice age might not even look like writing to us, even though it is.  After all, scientists have only recently realized that the slash writing found all over the Americas is actually writing. Honestly – look at this picture and tell me if you found a stone like this whether you would realize it had writing on it.

Anyway, back to the topic at hand.  Lee obviously doesn’t know what he is talking about.  The universe wasn’t created 6,000 years ago and there were plenty of humans around 6,000  – 10,000 years ago writing things down and going about their business to prove that fact.

The really annoying thing to me about this biblical creation movement is the people who tell me that the reason we should believe the bible is because it is the oldest written account of creation.  Since it is the oldest, it is supposed to be more accurate then others.  SIGH!  Again, ignorant people’s opinions should not be taken seriously.

A couple of thousand years earlier we had lots of writing from the Egyptians, Sumerians and the Chinese.  So, if the older something is, the more likely it is to be true, then perhaps we should encourage these illiterate folk to consider the Chinese and/or Egyptian creation myths as more true then the bible.

Ok – I’m done ranting now.  My point is that yes there were people around 6,000 years ago. Yes, they were writing things down and keeping oral histories. And none of them reported creation as having started then, only proto states and governmental organizations being created. Lee’s lack of basic knowledge on these issues is a case study as to why we need to improve education in the state of Florida.